So, you know those comics that teach stuff?  No?!  Well, did you know that comics can teach stuff?!  It's been proven.  One of the best ways to learn material is through the combination of text and image.  The text explains, and the image helps you connect the explanation with a visual representation of the given text, but I digress.
Anyway, I am doing one of these "comics that teach stuff."  It's for Comfort Dental (this is for you new folks, because I've talked about this before) and it's called The Adventures of Toothy and Friends.  It's a superhero adventure story that teaches good dental hygiene.  This is from the second installment with a new installment coming each month!  You can see the first installment on Comfort Dental's facebook page.
Posted by Jay Peteranetz at 8:39:00 AM No comments:

Look! I made a Laser! 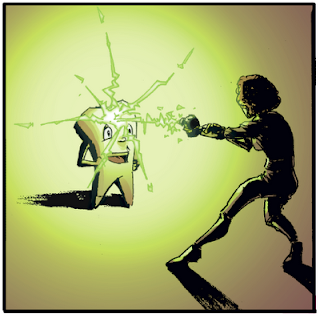 This is a panel from the next Adventures of Toothy for Comfort Dental.  I made a Laser!  What do you think?
Posted by Jay Peteranetz at 11:56:00 AM No comments: 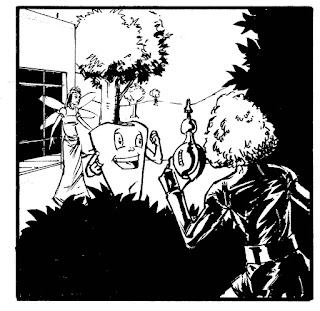 So I've been contracted to do 12 monthly comic strips for Comfort Dental.  This is one of the panels from the latest of these strips.  We are introducing a series of bad guys with dental disease names, like Ginger Vitis (seen above hiding in the bushes) and others like Hal E. Tosis.  And other great villain names.  Look for the final version of this very soon at comfortdental.com or on their facebook page
Posted by Jay Peteranetz at 1:14:00 PM 1 comment: 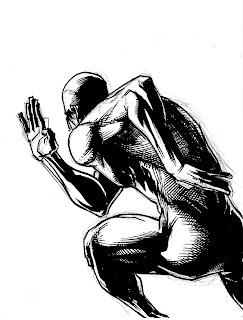 I did these inks last night and was fairly disappointed...then I looked again this morning, still a little disappointed, but I do see some good in there. I left the arms fairly high contrast, especially to let them stand out and away from his body.  That worked.  On the other hand, the hatching I did on his back and biody, didn't quite create the planes of the form correctly...need to work on that, otherwise, the energy is still there and the gesture of the running is still very much alive.  Not too bad...
Posted by Jay Peteranetz at 8:15:00 AM No comments: 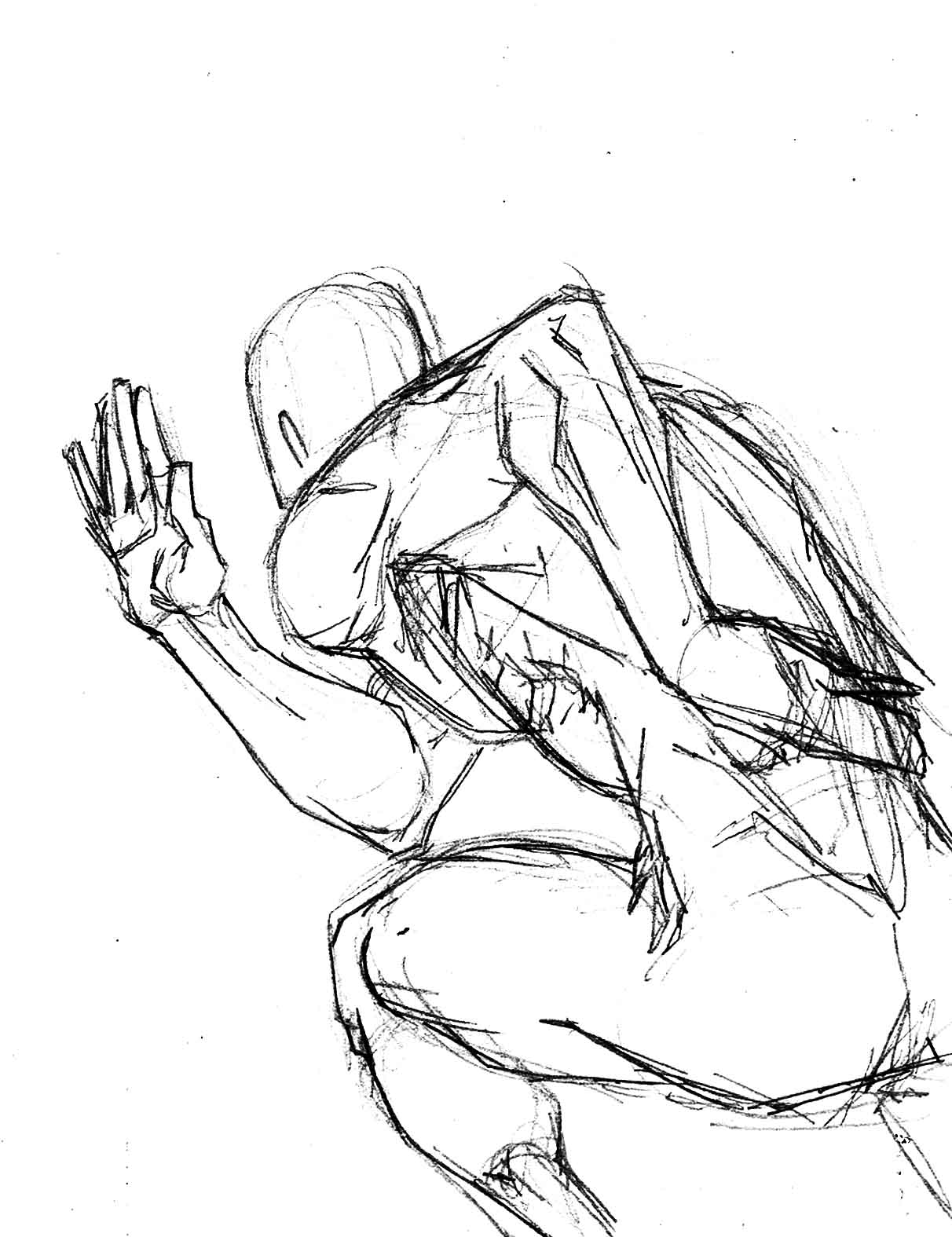 This is daily sketch 4a.   The reason for the a, I didn't get to complete this sketch last night before I fell asleep with a pencil in my hand.  I am drawing a comic strip for Comfort Dental that has a chase panel and I could NOT figure out how to draw someone running, so I found a picture and started working on that...so here the under drawing, the finished piece will come tomorrow, possibly with the panel I was trying to draw with it.  Enjoy!
Posted by Jay Peteranetz at 9:59:00 AM No comments: 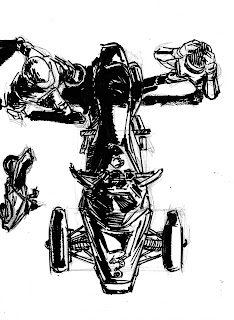 Today's sketch is of a Can-Am Spyder.  It's a three wheeled road bike by the same people that make Ski-Doo snowmobiles, and if you looked at the early models, it was like looking at a Ski-Doo Rev chassis on the pavement.  They have diverted a bit since then and made them more unique unto themselves, but I digress.  This sketch is in preparation for an upcoming post-apocalyptic story I am about to start on.  There are four rules to the story: 1) 5 pages long 2) dinosaurs 3)main character is me 4)motorcycle...and yes this counts.
Posted by Jay Peteranetz at 9:00:00 AM No comments:

Today: An Airplane, Tomorrow: The World(?) 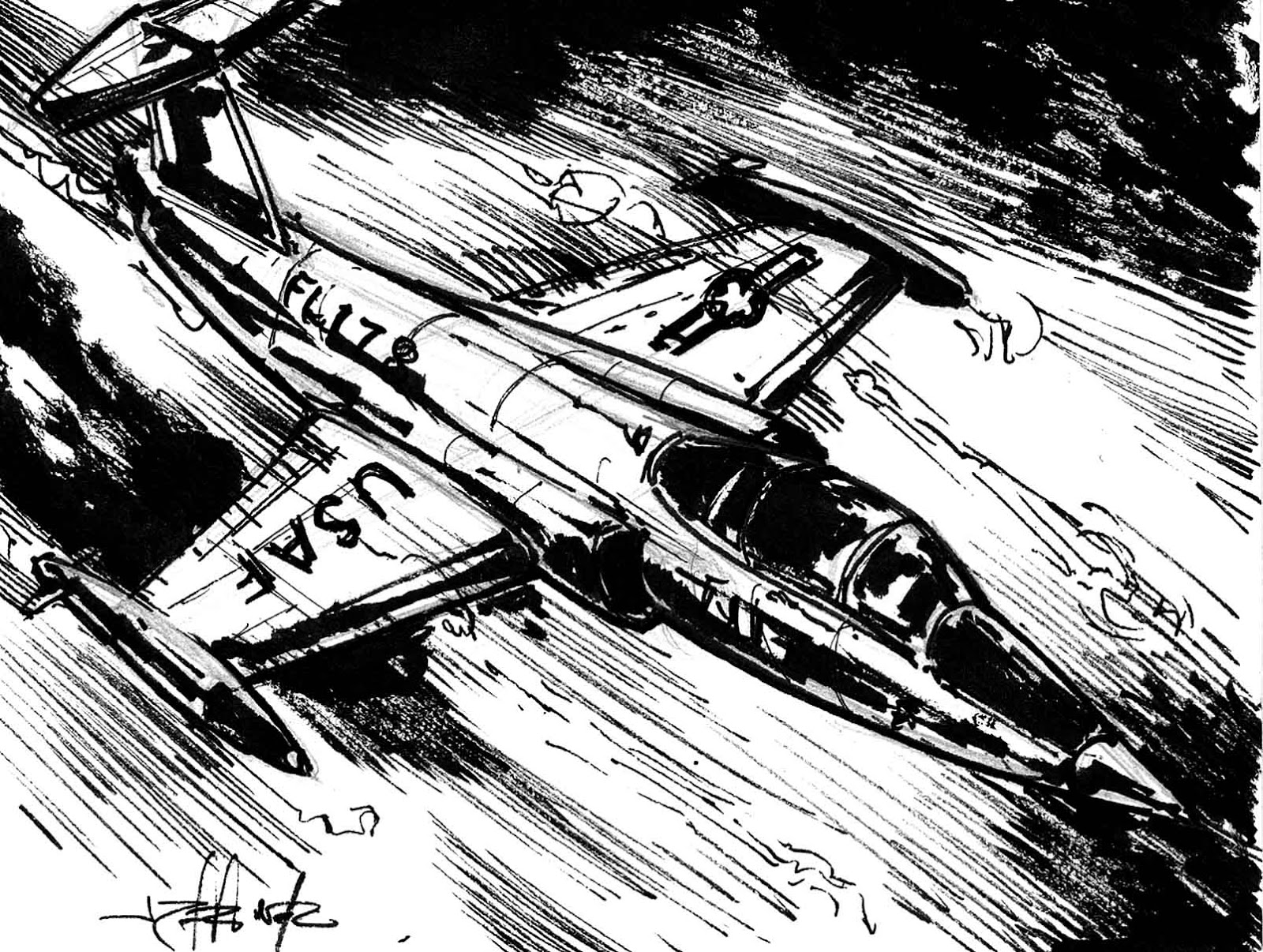 So, With these daily sketches, I figured I'd put them up no matter what, success or failure, I am just trying to get better at the stuff I'd need to draw to be successful...today, fail.  Tomorrow, who knows!
Posted by Jay Peteranetz at 8:57:00 AM No comments: 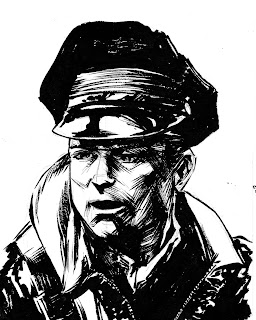 In an effort to really nail down my style, my anatomy, my skills and such, I have decided I am going to be doing a small 4x5 sketch every day, usually while waiting for my new baby to fall asleep. This came from the Five C's of Cinematography.  The section that talks about consistency scene during shot selection.  I am going to be doing sketches from life and from pictures and such...whether good, bad or indifferent, they will be here.  As I go along I'll also be posting other work so you can see how it's effecting my work and hopefully improving my aesthetic.  Enjoy!
Posted by Jay Peteranetz at 12:53:00 PM No comments: 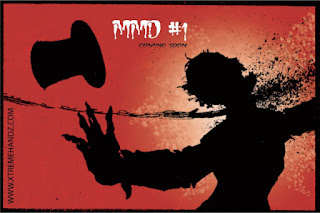 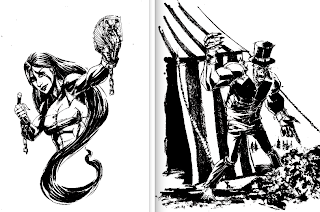 So it's officially been announced on xtremehandz.com.  MMD will be released by the end of the year....what is MMD you ask?  It's a comic book on the back of a deck of poker cards.  WHAT?!  What's that you say?!  The back of a deck of cards?!  WOW!  This is the brain child of De'vo Vom Schattenreich, creator of the Xtreme Card Manipulation discipline.  You can see his work at handlordz.com as well as some of his other poker decks.  This has been 10 years in the making for him,  and it will FINALLY come to fruition this year.  If you remember I put some teasers of the process up, revisit them here:
MMD Teaser 1
MMD Teaser 2
MMD Teaser 3
MMD Teaser 4

I got to show this off at the New York Comic Con this weekend and got a LOT of great feedback about it.  I'll let you when and where it's available, but everyone I talked to thought it was a very cool idea.  Thank you for giving me the chance to work on this project, it's been a blast!  AND if you like it, BUY it!
Posted by Jay Peteranetz at 11:51:00 AM No comments:

Free Realms and another NYCC update 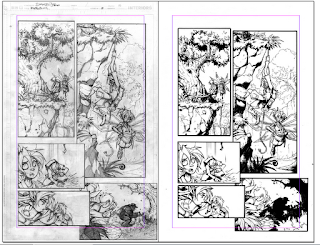 This is a page from Wildstorm's Free Realms.  Although I never had a chance to read the comic, I love the artwork.  This is by Red-J (Jon Sommarvia).  I made a few changes to the placements of black, especially in the last panel, to help with keeping values on the same planes.
Also, I am writing this three days before I am in NY, so I'll update on my progress with my phone as soon as today comes around.
Posted by Jay Peteranetz at 12:00:00 PM No comments:

X-Men and in New York at the Comic Convention 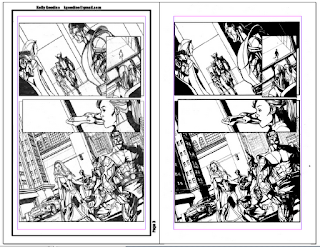 This is another inked page by me.  The original pencils were done in 2004 by Kelly Goodine (kego44 on Deviant Art).  It was a 7 page sequential about the X-Men in the danger room.  I picked the page with the most characters and what I felt to be the best depth.
Also, I am in New York at the Comic Con right now.  I am wandering mostly, but you can follow my twitter feed (@jpeteranetz) to keep tabs on me while I am there.  I may get the opportunity to sit with CCP Comics and Rock Comic Con.  I'll tweet it if it happens.
Posted by Jay Peteranetz at 2:00:00 PM No comments:

Red Zombie: Nuts to YOU! 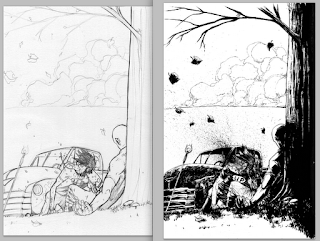 Nate was very proud of himself for this page...a zombie ripping some scrotum...good for you.  I really liked the opportunity this page presented to get some major depth and to really capture the rip.  What do you think?  What a great way to end such a wonderful zombie story of revenge.
And, in two days I leave for NY.  I believe I am ready for the convention, and I am DEFINITELY ready to make my mark in the comic community...BRING IT ON COMICS WORLD!
Posted by Jay Peteranetz at 8:42:00 AM No comments: 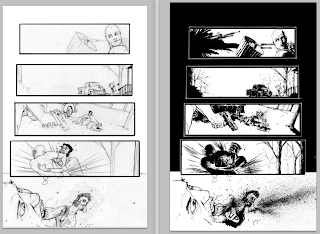 Over the years, I have been given a lot of advice about portfolio presentations, and how to do this and that, what to include, what NOT to include.  Most of that has been advice about full artistic portfolios.  Inking portfolios are a bit different.  You want to include a series of images over different artists to show your versatility so an editor knows you can handle many types of projects.  This piece as well as the previos Red Zombie posts will be included to show my ability to ink over a sequential series, but I'll also have examples from Jason Sobol, Kelly Goodine, and Red J.
Posted by Jay Peteranetz at 8:40:00 AM No comments: 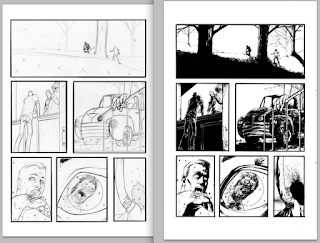 So, I am heading off to New York for the Comic Convention next week with two portfolios, one of my sequential work, and one of just my inking.  I think the inking portfolio is looking pretty strong, especially with entries like this one...check out the eyeball reflection on panel 5...pretty sweet huh?!  I was pleased with that panel, as well as the directional focus from panel 2.  It needed a little something something. 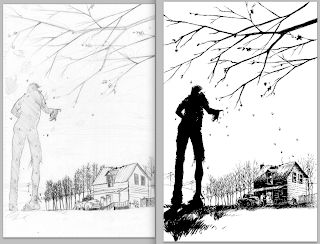 This is a nice tranquil scene of a zombie coming upon a house.  Look at the unsuspecting people near the house preparing, and enjoying the nice fall afternoon...
Posted by Jay Peteranetz at 8:17:00 AM No comments: 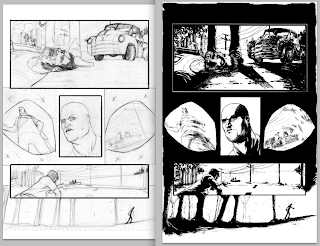 This is the sixth page of my inks over Nate Hamel's pencils.  This will be published by Legacy Action Comics (twitter: @legacyAC) in their second issue as soon as all the other artists are finished with their stories.  I was hoping to have it by the time I went to NY next weekend for the New York Comic Con, but alas, it is not to be.  Also, I'll be at the con Friday afternoon and Saturday.  Follow me on twitter: @jpeteranetz to find out where I'll be when.  I'll be wandering around mostly, and getting reviews from editors, and networking as much as I can, but I have a couple of offers to sit at a table or two for a while, so I'll let you know when and where on my twitter.
Posted by Jay Peteranetz at 8:14:00 AM No comments: